The new construction project 14 ALRAM offers you the opportunity to enjoy everyday life in a residential oasis in the middle of a district of Munich that is rich in tradition. Enjoy the beneﬁts of an upscale, urban living style with concierge service in your new home.  Communal spaces such as lounge, ﬁtness and wellness areas as well as an attractive garden courtyard create absolute added value. Live your life relaxed and in style. Give yourself time for the things that really matter to you.

COMFORT AND ULTIMATE QUALITY OF LIFE 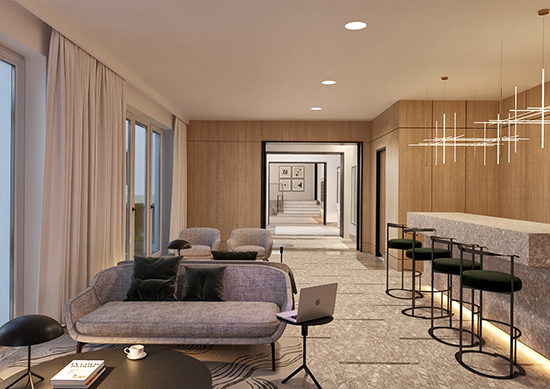 A spacious reception area with concierge service offers residents the opportunity for a friendly chat with their new neighbours. With plenty of light and space, the adjoining lounge creates a feel-good atmosphere and invites you to a short business meeting in a relaxed ambience, a change of location in the home office or simply to relax. The concierge provides active support in everyday life as a kind soul and is available to all residents as a ﬁrst point of contact. The service guarantees security and cleanliness, organises and manages the communal areas from underground car park to garden courtyard, from ﬁtness to wellness area. But more than that: The extensive range of services assists with many small and everyday aspects of living, such as receiving parcels.

In the friendly garden courtyard with inviting seating and children‘s play areas, surrounded by lots of natural greenery, you can recharge your batteries – an urban oasis of nature, fresh air and sunshine. 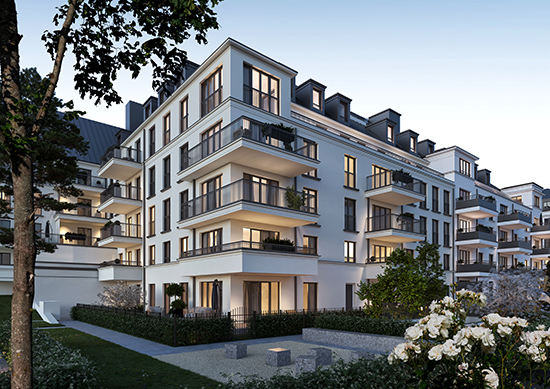 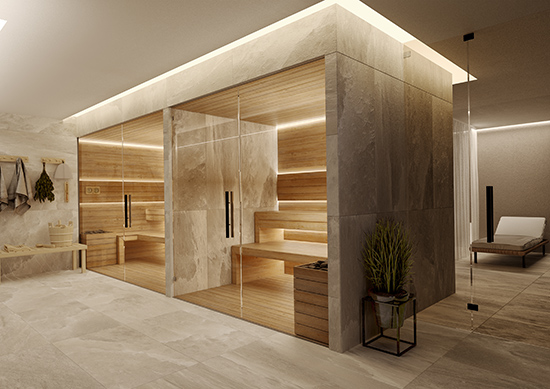 Active, healthy and dynamic: Maintaining and promoting health through sport and ﬁtness is an important part of many people‘s lives. So, being able to seamlessly ﬁt workouts into your daily routine at the inhouse gym is ideal. For this purpose, the professionally equipped ﬁtness area offers holistic equipment with cardio and strength training machines as well as an area for yoga and Pilates with mats and accessories. Best conditions for a healthy sports routine! The private sauna and wellness area, which is exclusively available to residents, ensures physical well-being and balance. This is located on the mezzanine floor and is conveniently accessible from the inside via a separate entrance from the apartments. A ﬁnnish sauna and a biosauna with rest areas and changing rooms invite to relax.

The attractive location not far from the Implerstraße underground station supports a mix of modern mobility options optimally suited to the needs of a mobile urban society. A private, bright and modern underground walkway offers 154 parking spaces for cars with the option of connecting electric charging stations. The houses are directly connected to the underground car park via three access hubs with lifts. A further 47 car parking spaces are available for grocery retailers. 14 ALRAM offers attractive parking spaces for bicycles and cargo bikes in a bicycle room on the mezzanine ﬂoor, conveniently accessed via its own bicycle lift. The service is complemented by a bicycle repair station. 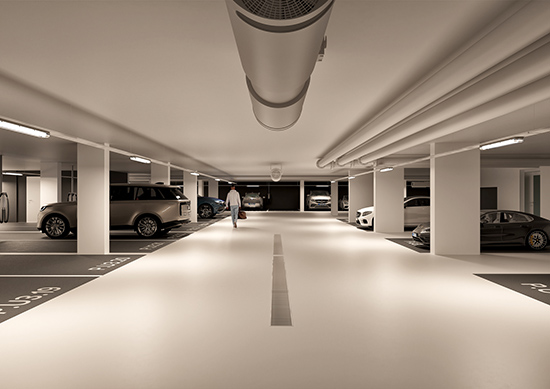 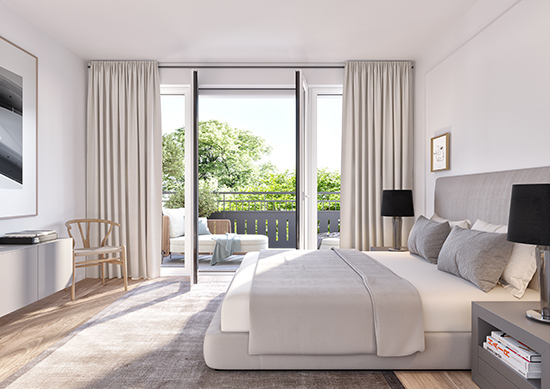 The apartments in 14 ALRAM will be a stylish home for people who are looking for something special. This is of course also reﬂ ected in the interior design and in the furnishings down to the smallest detail. Good architecture is the sum of its parts. For this reason, a coherent initial selection of elegant materials and long-lasting surfaces as well as ﬁxed furnishings was selected to help make purchasers decisions easier. The furnishings are of a very high quality and can be selected and customised from three design collections consisting of brandname products from renowned manufacturers. All apartments are equipped with modern and energy-efficient building services.  14 ALRAM leaves nothing to be desired.

In the long term, a modern branch of a full-range retailer will cater for the physical well-being of the residents of 14 ALRAM and the neighborhood. In this way, the new construction project will actively contribute to enhancing the quality of life in the entire neighborhood.
The focus will be on high-quality goods and a high proportion of organic products and food from the region.
Access to the sales areas in the eastern part of the mezzanine floor is provided separately via Alramstrasse, as is delivery, which is handled via a well-integrated and closable delivery pocket. 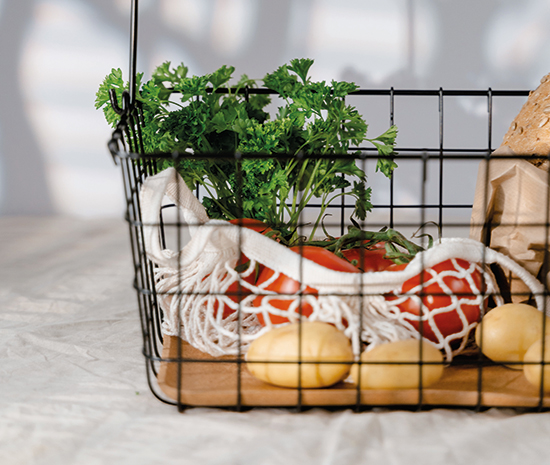 Munich is often referred to as the “secret capital of Germany”, even though, according to the deﬁnition, the city is actually Germany‘s third-largest city with a current population of just under 1.5 million. For many, however, the Bavarian metropolis is much more! The city is a leading European business location, it is one of the most important cultural cities in Europe, is an important media centre and attracts talent from all over the world to Bavaria with attractive research institutes, excellent universities and colleges. Munich is also a city of short distances – it offers plenty of open space and a mix of modern transportation options. 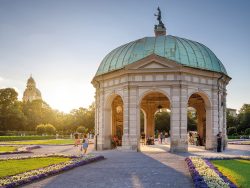 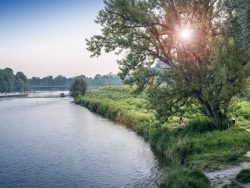 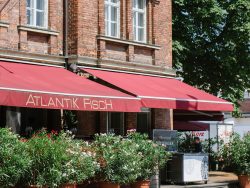 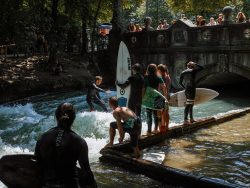 Despite all its dynamism, Munich is picturesque. The old and inner city with its historic streets and squares, Marienplatz and Viktualienmarkt, the Residenz or Hofgarten are popular with tourists and locals alike. The English Garden creates attractive green spaces in the north of the city, and the Isar River with its floodplains fully exploits the recreational potential in southern Munich.
Impressive listed old buildings, historic facades and attractive squares: Ancient trees lining the streets invite you to linger in one of the many street cafés, visit the original arts and crafts businesses or small boutiques. The popular neighborhood around 14 ALRAM masters the balancing act of combining different atmospheres: urban bustling and casual relaxed, traditional Munich and creative international. The streets are characterized by charming cooperative buildings and stately old houses, by cobblestones and listed gems. 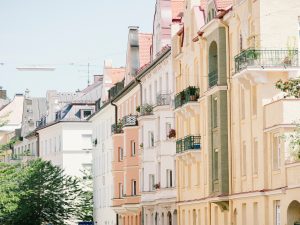 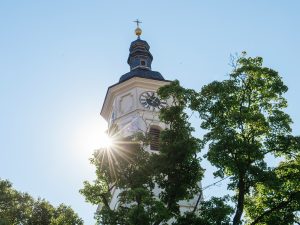 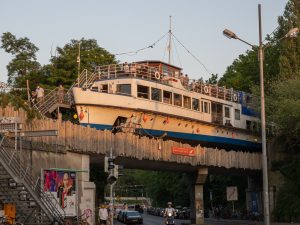 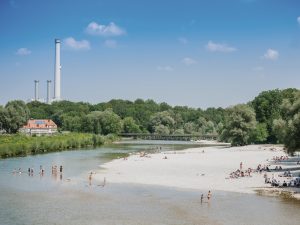 Green spaces in all directions offer relaxation in between - usually quickly accessible by bike or on foot. If you like big movies and small events in the summer, you will find an atmospheric open-air atmosphere at the Seebühne in Westpark. To the east, the legendary Flaucheranlagen with their green-lined gravel banks invite you to relax. From there, it's also just a stone's throw to Hellabrun Zoo, founded in 1911 and at the time the world's first geozoo.
The Gasteig HP8 fascinates with top-class performances and concerts. New since 2021 is the Volkstheater. Dörﬂiche atmosphere with stores, inns and a small theater can be found in the Stemmerhof. The nearby Grossmarkthalle is one of Europe's largest municipal marketplaces.

The Implerstraße subway station is a 3-minute walk away. The short drive to Sendlinger Tor takes only 4 minutes. By car, both the airport in the north of the city and the excellent local recreation areas in the surrounding area with Munich's Hausberge mountains or Lake Starnberg can be reached in about 30 minutes. Living in 14 ALRAM means living right in the middle of it.

For more information about the project, we look forward to hearing from you!
Please fill out the contact form.
If you have any questions or requests, please do not hesitate to contact us by telephone at
+49 (0)89 -255 44 65 500
or by email at
verkauf@than-immobilien.de
at your disposal. 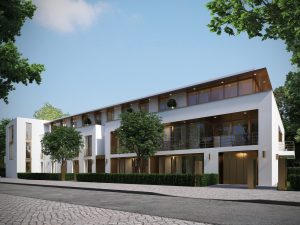 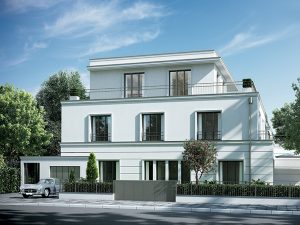 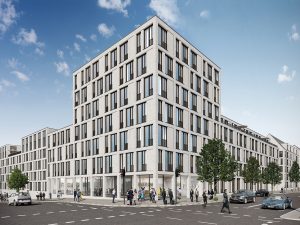 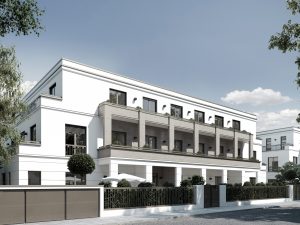 M-CONCEPT Real Estate creates exceptional real estate for the urban lifestyle. Our properties combine classic stylistic elements with modern architectural language - at top locations and in very special locations. We attach great importance to this. That's why we as builders are not only project developers, we are also property developers and close advisors to our clients.
More at: www.m-concept.de